PoCOsteo PR
Osteoporosis remains underdiagnosed and undertreated. The early detection of this increasingly prevalent disease is crucial in reducing the number of people suffering from its effects and consequences. Labman, alongside partners from across Europe, is delighted to announce that they will be developing a revolutionary device that seeks to drastically reduce the number of people afflicted with this ‘silent killer’ disease, through early detection and treatment.

With almost 9 million fractures every year caused by osteoporosis, the effective diagnosis and treatment of bone diseases is becoming an increasingly high priority globally. The project, named PoCOsteo (Point of Care for Osteoporosis), aims to do exactly what its name suggests, developing an easy-to-use, portable apparatus for use anywhere and everywhere. This high precision device will utilise the latest technologies and techniques in automation, genomics and microfluidics to put a life-changing tool into the hands of doctors and healthcare practitioners, even in more remote areas.

Labman, known for creating automated, robotic systems for clients across the world in a variety of sectors, is thrilled to rise to the challenge of the project that is being coordinated by Ghent University. “This is an important project for Labman and its partners,” said Ian Riley, Labman’s Technical Director, “Automation is for the benefit of humanity, and this technology seeks to make a huge positive impact in the fight against this pervasive disease.”
Current X-Ray based detection methods for the disease are very expensive, hospital-based, and time consuming, and crucially can only detect the presence of the disease after considerable bone loss has occurred. Correspondingly, the chances of early detection for those living in poorer or more remote parts of the world are currently slim to none.

In contrast, the new device developed by the PoCOsteo team will analyse a blood sample to detect biomarkers and genetic markers that will provide an indication of susceptibility to the disease. Using this advanced method in combination with the latest automation technology, results will be available in minutes instead of days. Samples can also be collected far more easily and unobtrusively, and most importantly, indicators of the disease are visible far earlier.
The benefits to patients’ welfare is clear, including vastly reducing the pain and discomfort of current testing. However, PoCOsteo also aims to save health departments and governments huge amounts of money due to the early detection of the disease. It is estimated that the cost of osteoporosis, and subsequent fractures, is currently around 48 billion USD every year in the US, Canada and Europe alone.

The project is supported by the European Union’s Horizon 2020 Framework Programme (H2020-NMBP), and its partners include Universiteit Gent, Universitat Rovira I Virgili, microLIQUID, Fraunhofer-Gesellschaft zur Förderung der Angewandten Forschung, Medizinische Universität Graz, Endocrinology and Endocrinology & Metabolism Research Institute (Iran), Fundico and The International Osteoporosis Foundation in a support and advisory role . Each of these institutions will be utilising their own individual areas of research and expertise to create this desperately needed system. 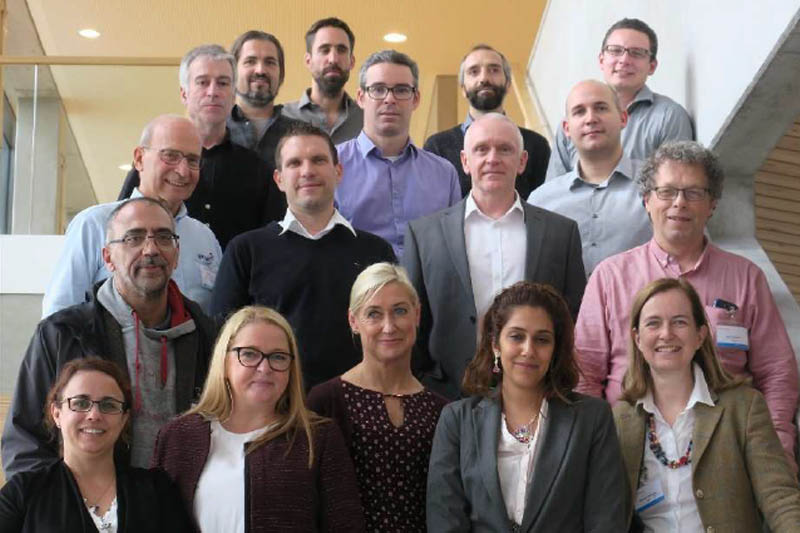 
What are cookies?
Cookies are files or pieces of information that may be stored on your computer (or other internet enabled devices, such as a smartphone or tablet) when you visit a Site. A cookie will usually contain the name of the website from which the cookie has come from, the "lifetime" of the cookie (i.e. how long it will remain on your device), and a value, which is usually a randomly generated unique number.

What do we use cookies for?
We use cookies to make the PoCOsteo Site easier to use and to better tailor the PoCOsteo Site to your interests and needs. Cookies may also be used to help speed up your future activities and experience on our Site. We also use cookies to compile anonymous, aggregated statistics that allow us to understand how people use our Site and to help us improve the structure and content. We cannot identify you personally from this information.

Do we use third party cookies?
We use a number of suppliers that may also set cookies on your device on our behalf when you visit the PoCOsteo Site to allow them to deliver the services they are providing. When you visit the Site you may receive cookies from third party websites or domains.

How can I control or delete cookies?
Most internet browsers are initially set up to automatically accept cookies. You can change the settings to block cookies or to alert you when cookies are being sent to your device. There are a number of ways to manage cookies. Please refer to your browser instructions or help screen to learn more about how to adjust or modify your browser settings. If you disable the cookies that we use, this may impact your experience while on the PoCOsteo Site, for example you may not be able to visit certain areas of the Site.

If you use different devices to view and access the Sites (e.g. your computer, smartphone, tablet etc) you will need to ensure that each browser on each device is adjusted to suit your cookie preferences.